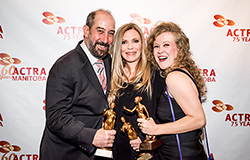 For those of you who missed the Gala, you may still view the INTRO VIDEO created especially for the 2018 Awards.

AND THE WINNERS ARE:

Outstanding Performance By A Female Artist In A Short
Daina Leitold, “The Interrogation”

Outstanding Performance By A Male Artist In A Short
BJ Verot, “Fisher Cove”

“This red carpet, hosted by Lisa Durupt and Erik Athavale, exceeded all our expectations”, said ACTRA MB President Jan Skene. “Over 450 members of our Manitoba film community came out to recognize the achievements of our peers. We celebrated ACTRA Manitoba’s 60th Anniversary and ACTRA National’s 75th; we were honoured with the presence of Mayor Brian Bowman and the Honourable Minister of Culture, Heritage and Sport, Cathy Cox; and we had the industry party of the decade! Our film industry in Manitoba is flourishing, and I couldn’t be more proud of our Manitoba film family!”